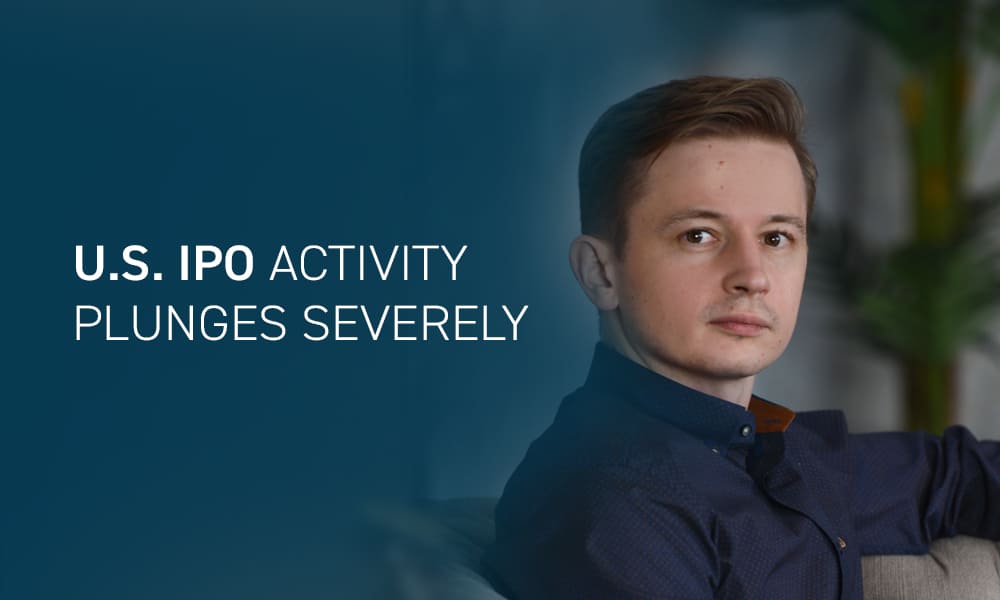 1. Numbers
2. In a nutshell
3. Giving a thought to the whole thing

Marked 238 days without a tech IPO worth more than $50 mln as the market downturn sparked the longest drought in the U.S. in 20 years.

According to Morgan Stanley, this year has topped the previous records set in the aftermath of the financial crisis in 2008 and the dot-com crash in the early 2000s. Fast-growing tech stocks have been disproportionately hit: the tech-dominated Nasdaq Composite has fallen 28%, while S&P 500 has dropped just over 19%.

Today, we see a tremendous amount of uncertainty in the market. And uncertainty is the enemy of the IPO market, too.

✔The Renaissance IPO Index, which tracks U.S. listed companies, is down 45% since the beginning of the year.
✔According to Bloomberg, 182 companies have raised around $21.6 billion on U.S. exchanges this year, including the largest IPO worth $1.68 bln by well-known Corebridge Financial cautiously accepted by investors.
✔Based on Dealogic’s data, it’s around $16.2 bln. Roughly speaking, even with discrepancies, overall U.S. IPO volumes are down 92% YoY after Corebridge’s deal.

No surprises here. Many went for IPOs while things were going well. That’s why we saw busy markets in 2020/2021. The cycle is now beginning anew. Tech companies raised so much private capital before the recession that there was no longer a need for more. For that reason, most issuers have pushed their IPO plans back to 2023.

There’s a «buyers’ strike». Investors are in no mood to take elevated risks, while sellers are still looking back with an anchoring bias. Unprofitable tech and biotech stocks, which act as competitors for new IPOs, have plummeted.

Also, the stock market is suffering from the Fed fighting to reduce inflation through aggressive rate hikes. It affects stock prices, devaluing future earnings and raising fears in a recessionary economy.

The IPOs of fast-growing tech companies were too dominant last year and brought some of the biggest profits, but it works the other way today. This year, they’re suffering proportionately from the sell-off.

Forecasts have worsened in some companies and sectors. As macroeconomic factors affect their valuations. According to FactSet, IT groups in S&P 500 almost met earnings estimates in Q2, but forecasts for Q3 have been repeatedly revised lower—with earnings expected to drop 4% YoY.

Last year, there was little discussion about profitability among IPO candidates. Now there are more of them. Nonetheless, we still see a problem shifting the focus of attention from a growth story to a profit story as issuers need time to prove their progress.

Many tech companies are putting greater emphasis on cutting costs to make a profit, but they would need time to prove that the changes do work.

Giving a thought to the whole thing

1. Market players switch from long-term investment to short-term trading. Due to market volatility, many find it hard to keep the long-term horizon as they have to become market traders with a 3–6 month horizon.
2. The upcoming IPOs, when the Fed raises rates to more than 4% (yesterday, it raised rates by 75 bps to a target range of 3–3.25%), will bring more reasonable prices. Founders will no longer be billionaires overnight.
3. At the year-end, S&P 500 may take the lead. But, over the past five years, Nasdaq Composite showed +78% compared to +54% gained by S&P 500. Tech stocks lose more in the short run but also perform better in the long run. We want to see a more stable outlook and investors returning to buying public securities before they take risks buying tech stocks in IPOs.
4. Now the feeble market is shrinking the time horizon for tech listings to revive due to uncertainty, even after signs of life pop up in other sectors. And there’s more to come ahead, including the next U.S. presidential election.