For over 20 years, dividend shares with the biggest payout ratios have held up well against two groups: companies that pay out a smaller portion of their earnings as dividends and companies that buy back lots of their shares.

This conclusion comes from Credit Suisse’s recent research note published by Barron’s in part. I used a structural approach to data analysis, so read on to get the gist of it.

1. A dividend payout ratio — a percentage of earnings per share paid out as dividends in this case—is a widespread metric that investors use to get an idea of ​​how much shareholders receive.

2. Companies that return more excess capital to shareholders as dividends have proved to be effective and keep performing perfectly. This is in contrast to share buybacks that market players often view as a driver of share prices.

3. The note analyzed net share repurchases and dividend payout ratios for companies from the S&P 500. The index factored in the percentage of earnings per share paid out as dividends over the past four quarters.

4. After that, these companies were divided into thirds according to the rating of their dividend payout ratios: the higher the payout, the better the rating. The top third was compared with the bottom third, with a similar approach being applied to buybacks. The sectors were factored in.

5. Companies from the S&P 500 with high dividend payout ratings (four-quarter earnings bases and other data as of May 24) were selected.

Results in a nutshell

3. Since the beginning of 2020, companies from the top third have been growing, depending on their sector. Financial companies: +7.2 p.p., technology companies: +3.6 p.p. (for sure, the broad decline in the share market in recent weeks has resulted in widespread losses, apart from dividends and share repurchases).

Here’s an overall idea of dividends. Janus Henderson Global Dividend Index for May:

✔Payouts in the US and Canada ►growing to reach quarterly highs, sector-wide.
✔99% of US companies increased payouts or kept them at the same level.
✔In $$$ terms ► emerging markets: + 41%; Europe, excluding UK: +14.9%; North America: +11.8%; Asia-Pacific, excluding Japan: +9.2%.
✔In Europe, Q1 is seasonally calm ► slow-growing Swiss pharmaceuticals dominated, but post-COVID recovery was seen in most countries.
✔Australia outperformed its Asian neighbors thanks to the powerful BHP’s #BHP dividends ► just imagine that almost three-fifths of Australia’s Q1 was paid by #BHP ($10.8 billion).

✔mining payouts: +29.7% ► but there’s a growing divergence between companies;
✔oil dividends showed +31.8% in base terms ► those groups that cut them during 2020 are recovering;
✔dividends YoY are growing in all sectors.

Let’s sum it up

In general, it’s all about “putting your money on the table.” I choose dividends over share buybacks. Cash dividends, especially when they go up, are a much better metric of the prospects and the company’s real state.

See below for the current list of the world’s largest dividend companies. 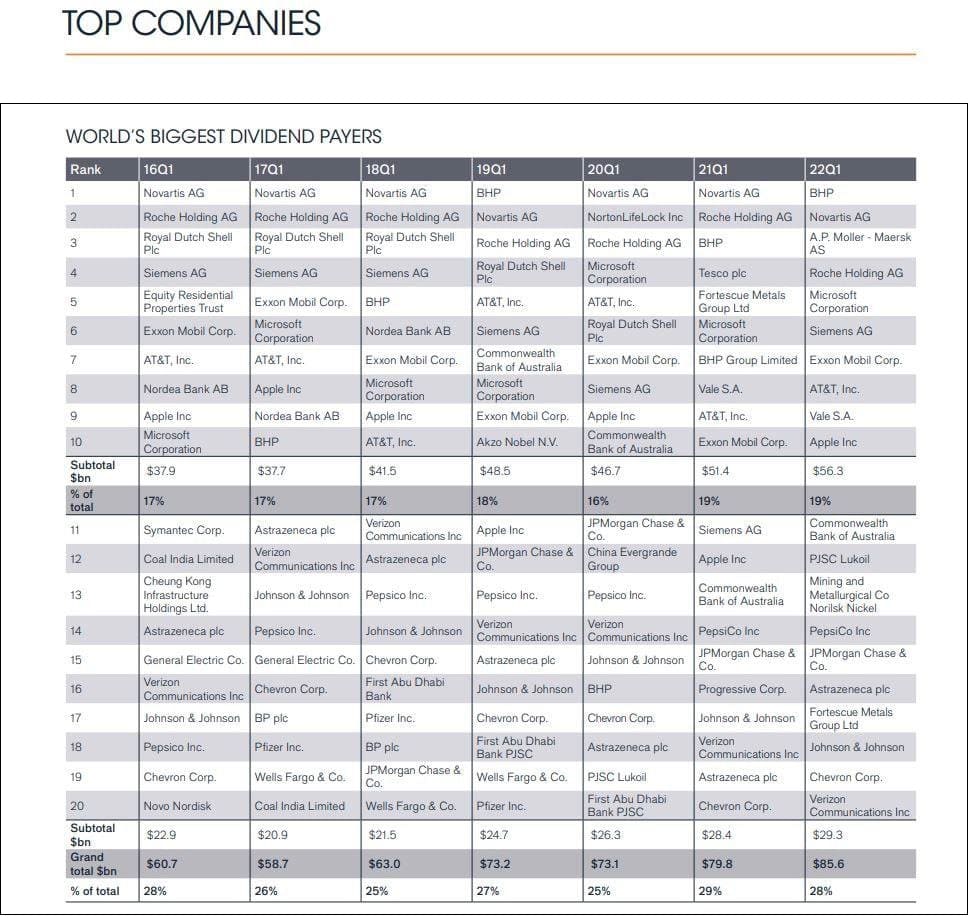