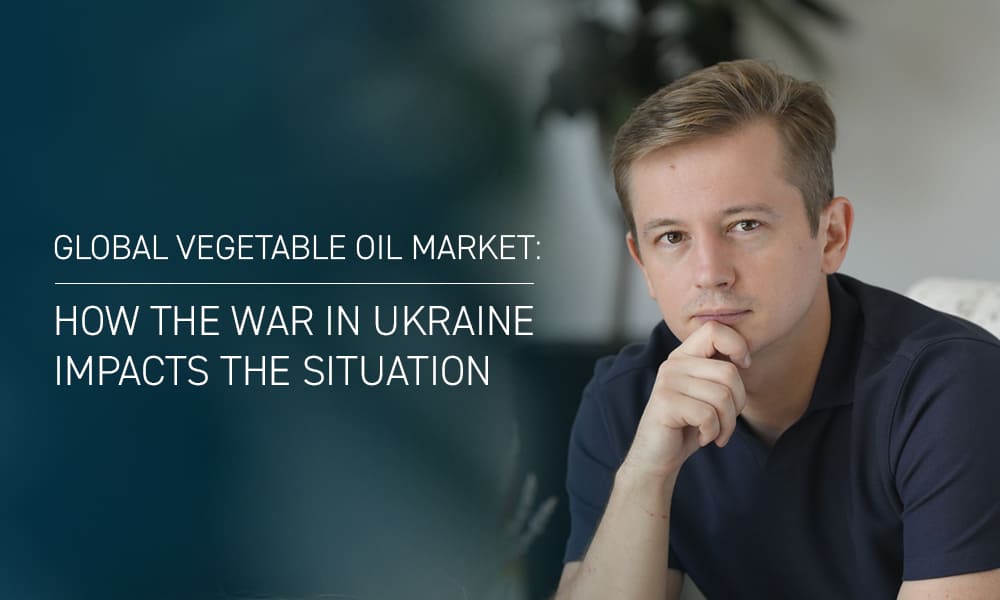 Global Vegetable Oil Market: How the War in Ukraine Impacts the Situation

1. How the war impacts the situation
2. Additional growth triggers
3. How it all impacts companies
4. Let’s sum it up

The war in Ukraine has made agricultural prices skyrocket. Until now, the focus has been on cereal crops, wheat in particular, but another pain point in food security is the impact of the war on vegetable oils.

How the war impacts the situation

✔sunflower oil exports have been disrupted. Key consumption markets include India, the EU, and China, accounting for more than 75% of Ukraine’s total exports.;
✔as the seaports are blocked, about half of the sunflower oil that would normally be exported from last year’s crop can’t be exported from Ukraine. The only alternative is the pricier routes westward: via Romania or Poland.;
✔processing plants are still standing idle, and most Ukrainian sunflower farms operate east of the Dnipro River, where the most active hostilities are now taking place.;
✔russia’s exports are currently limited due to the combined effects of disrupted maritime trade in the Black Sea, the export quota imposed by the Russian authorities, and the impact of sanctions.;
✔since the onset of the invasion, vegetable oil prices have grown by almost 30% on average. Sunflower oil prices have tremendously increased by more than 40%. It accounts for about 13% of vegetable oils sold on global markets, while Ukraine and Russia account for ~50% and 25% of sunflower oil sold in the world. As vegetable oils require little to no processing, high prices have already hit consumers, while retailers have already reported shortages in some cases.

1. Vegetable oils vary in taste and food use but are largely replaceable for many purposes. For this reason, vegetable oil prices tend to move together. But it can be a pain in the neck for food manufacturers due to allergy concerns and national labeling requirements. Changes like that will lead to production bottlenecks and shortages and thereby boost production costs and prices.

2. Recent growth in biodiesel production capacity. Mainly thanks to regulations that mandate blending it with fuel and subsidies that encourage its use, biodiesel production has grown over the past 20 years from less than 1% of total vegetable oil use in 2003 to almost 15% today. Major programs include the US, Argentina, and Brazil (mainly soybean oil), Indonesia and Malaysia (palm oil), and the EU and Canada (mainly rapeseed oil and palm oil). Biodiesel mandates put more pressure on global vegetable oil prices.

3. Export restrictions. In a nutshell, 43% of vegetable oils are subject to some kind of export restrictions. Exports from war-torn Ukraine have practically ceased. Russia has imposed its export quota for sunflower oil. Egypt and Turkey have banned the export of edible oils. In the current crisis, trade restrictions imposed by major vegetable oil exporters have increased price volatility.

4. Time frames for restrictions. Following the introduction of a progressive import levy on palm oil in March, Indonesia has banned the export of crude and refined palm oil from April 28 (to recap, the exports of this product brought $18 billion in 2020, which, in fact, is half of all exports of palm oil in the world). We don’t know for how long this ban will last, but the restrictions will further exacerbate the import needs of other countries such as India and Bangladesh. Export restrictions have disrupted the soybean oil market as well. On March 13, Argentina restricted the export of soybean oil and meal but, on March 31, allowed exports, raising export duties from 31% to 33%.

How it all impacts companies

✔investors tend to see big consumer companies as resilient to economic shocks. As commodity prices soar, some are beginning to question the ability of companies to make buyers pay for extra costs. Today, it’s a pain in the neck for top-level consumer goods companies that use tons of oils to produce everything: from snacks to lipsticks;
✔the benchmark palm oil contract for May delivery is trading at over $1,700 a ton, which is 70% above the average spot price in 2021;
✔Unilever #UL, aka the “soap-to-soup group”, spent $2.7 billion last year on palm oil, about 15% of its total commodity costs.;
✔Procter & Gamble #P&G, Mondelez #MDLZ and Nestlé are in a similar position. They are paying more for soybean and other alternative oils, so switching from one oil type to another would bring little financial relief.;
✔Indonesia’s ban will make it harder for businesses to state they are eco-friendly. Palm oil production has historically taken place at the expense of rainforests to make room for plantations. Today, Nestlé says 90% of the palm oil it purchased in 2021 has been certified deforestation-free. It has taken years for Indonesia to achieve results like that, and it will be difficult to do the same thing in other countries shortly.

Let’s sum it up

1.Higher prices for “affected” products will have a negative impact on consumers, especially the poorest households.
2.How long prices remain high will largely depend on how quickly peace returns to Ukraine and how long its agricultural economy takes to recover. Even under the best of circumstances, prices will remain high throughout this year and into 2023. It’s even though US farmers are set to plant record soybean acreages. Also, there are early signs that soybean production in South America and rapeseed production in the EU may be resurging.
3.The 31 million tons of vegetable oil currently processed into biodiesel worldwide represents the caloric equivalent to feed more than 320 million people a year. But biofuel mandates are unlikely to be suspended, given a strong political lobby.
4.Export restrictions are apt to exacerbate shortages, especially for key vegetable oils. It’s hoped that restrictions such as Indonesia’s ban will be temporary and not imposed by other countries. Otherwise, the poor strata of the population won’t meet their basic needs, given the fact that they already can’t switch to expensive butter or other products based on animal fats.