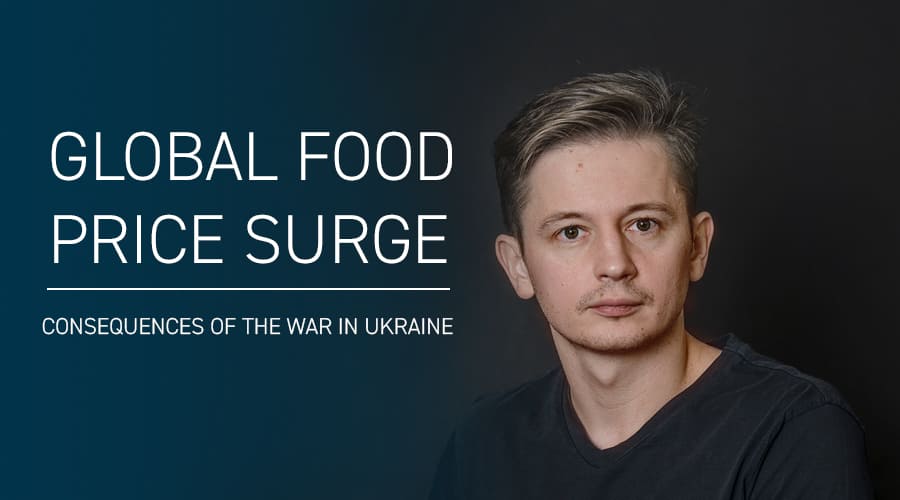 Global Food Prices Surging to Record High: Consequences of the War in Ukraine

The Food and Agriculture Organization (FAO) released stunning data. The FAO Food Price Index (FFPI) averaged 159.3 points in March, up 17.9 points (+12.6%) from February, making a giant leap to a new highest level since its inception in 1990.

So far, the latest increase shows new all-time highs for vegetable oils, grains, and meat sub-indices, while those of sugar and dairy products rose significantly as well.

The Cereal Price Index went up by 17.1%. FAO confirmed that the current increase reflected a surge in global wheat and coarse grain prices largely driven by conflict-related export disruptions from Ukraine and, to a lesser extent, the Russian Federation. The expected loss of exports from the Black Sea region exacerbated the already tight global availability of wheat. With concerns over crop conditions in the USA, world wheat prices rose dramatically, soaring by 19.7%.

Meanwhile, contrasting trends across the various origins and qualities kept the March value of the Rice Price Index little changed from previous levels and still 10% below its year-earlier value.

The Dairy Price Index went up by 2.6%, marking the seventh consecutive monthly increase and lifting the index 23.6% above its level a year ago. The upward trend persisted as the global markets got tighter due to inadequate milk output in Western Europe and Oceania to meet global demand. Quotations for butter and milk powders rose steeply, propped up by a surge in import demand for near- and long-term deliveries, especially from Asian markets, and solid internal demand in Western Europe.

The Meat Price Index went up by 4.8%, reaching an all-time high. In March, pig meat prices saw the steepest monthly increase since 1995, underpinned by supply shortfalls of slaughter pigs in Western Europe and a surge in internal demand because of the upcoming Easter holidays. Global poultry meat prices firmed, fuelled by reduced supplies from top-level exporting countries following avian flu outbreaks and Ukraine’s inability to export poultry meat in wartime.

The Sugar Price Index went up by 6.7%, reversing most of the previous three-month decline and reaching levels more than 20% above the value recorded in the corresponding month last year. The March rebound in global sugar price quotations was mainly prompted by the dramatic increase in global crude oil prices, which raised expectations of increasingly used sugarcane for ethanol production in Brazil during the upcoming season.

Additional support to global sugar prices was provided by the sustainably strengthened Brazilian Real against the US Dollar, which tends to restrain producer sales due to lower returns in local currency. However, the decent harvest progress and favorable production prospects in India, a major sugar exporter, contributed to easing the price hike and prevented larger monthly price jumps.

Now let’s get to the point

It’s clear that the food price inflation took root even before the war began, namely after a poor harvest last year for a number of reasons. Nevertheless, the war has resulted in a massive and worsening food security problem: almost 50 countries depend on Ukraine and the Russian Federation for at least 30% of their wheat imports. In 2021, 36 of the 55 countries facing a food crisis depended on the two countries’ exports for more than 10% of total wheat imports.

According to forecasts, from 20 to 30 percent of Ukrainian land for winter grains, maize, and sunflower will either remain unharvested or won’t be sown this spring. The yields of these crops may suffer as well due to a lack of fertilizers and pesticides. This global gap between supply and demand for food and feed could make global food prices go up by 8–22% above the existing levels.

No physical access, damage to production assets, agricultural land, roads, and other civilian infrastructure, blocked ports, restrictions, and bans on exporting certain crops and food products, lack of security, etc. — all of these factors are persisting, and these are the consequences of the month-and-a-half war. What the world expects in the light of the escalation of hostilities is a rhetorical question.

Given the following factors, will Ukraine manage to collect the existing crops:

And last but not least: the poor in developing countries will suffer the most from the war in which they aren’t involved. Sri Lanka and Pakistan have already faced their “Asian springs” that will bring more political upheavals and spread to Europe due to the parties gaining political capital from the cost-of-living crisis. So far, it’s on the surface.