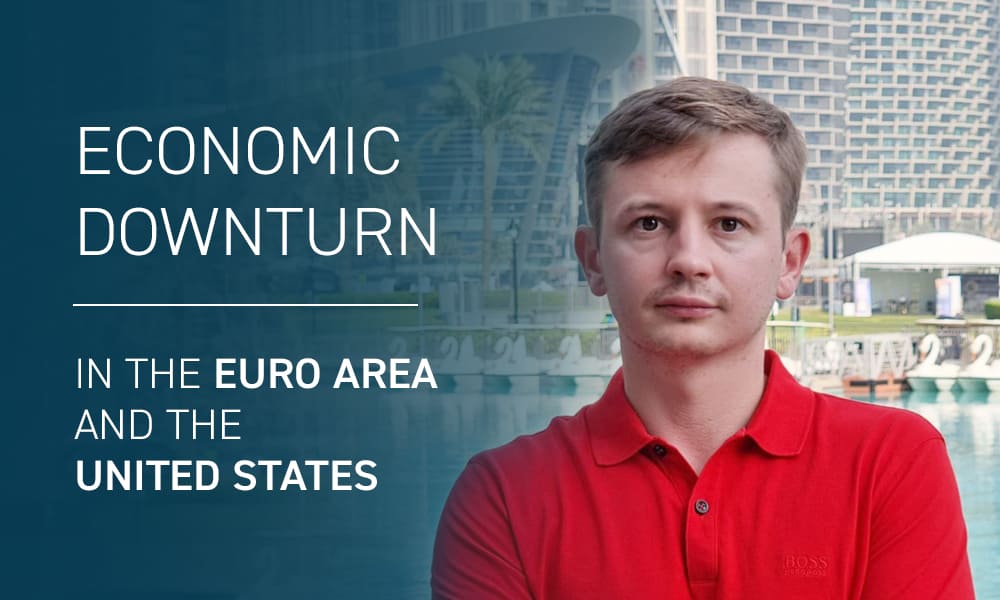 Economic Downturn in the Euro Area and the United States

At the beginning of the 4th quarter, the euro area economy demonstrated a pronounced recession. The rate of decline is notably the sharpest outside the global pandemic aside since April 2013.

The manufacturing industry takes the lead in terms of decline. Volume has been shrinking for five months now at a rate that has not been seen before the pandemic since July 2012.

There is a similar situation with production volume in the service sector. We have been witnessing a steady decline for three months in a row. Moreover, it demonstrates a severity, the likes of which have not been seen outside the lockdowns since May 2013.

The sharpest decline chemical and plastics industry, and the basic materials sector, all of which are highly dependent on energy.

Germany. The severe economic slump in both manufacturing and services sectors. PMI plummeted to 44.1. This is the lowest figure since May 2020 and the weakest since June 2009 outside of the coronavirus pandemic.

France. Growth came to a standstill. Composite PMI totals 50 vs 51.2, i.e. the first month during which there was no increase in production since March 2021.

Overall price pressure remains high. Increasing expenses on energy products and salaries along with a weaker euro counterbalance any decline in commodity prices linked to improved terms of supply.

Business confidence for next year dips to a two-year low.

1. The figures indicate a moderate GDP decline of about 0,2%. That said, demand is plummeting, and businesses are getting increasingly concerned about high inventories and weakening sales, especially against the backdrop of approaching winter. That’s why the risks are tilting towards the euro area economic contraction by the end of the year.
2. The PMI is likely to boost the ECB’s courage to keep tightening monetary policy in the coming months.
3. Speculations about the unavoidable recession will only continue to grow.

Beginning of the quarter and continued production decline. Service providers demonstrate a rapid decline, whereas manufacturers of goods show a slight increase in volumes for the second consecutive month.

The number of new orders is now shrinking again. Volume reduction is minimal but broad-based. Both manufacturers and service providers observe a weakening demand.

Decrease in demand from foreign clients. Direct impact of a strong dollar and challenging environment of primary export markets.

The decline in new foreign orders. Sharpest and fastest one since May 2020.

Now here’s information regarding the prices. At the beginning of the 4th quarter, the manufacturing cost inflation escalated after a 4-month period of a milder upturn. Rising costs remain historically high and are linked to rising interest rates, shortage of materials, and increasing salary arrears.

Trying to drive sales, companies offered concessions to customers, after the reduction of certain costs, e.g. those associated with transportation.

The decline in staff employment activity. Employment rate remained almost unchanged over the month. The seasonal employment index fell below the neutral 50 for the first time since June 2020, i.e. a drop in the number of people employed in the service sector. The same goes for the manufacturers of goods which note a slowdown in the job creation rate.

Reduced pressure on production facilities. This resulted in a shrinkage of outstanding work. There is a drop in the work unperformed in the services sector again. The situation looks similar as far as manufacturers of goods go: they note a decline in the volume of outstanding work for the first time in more than two years. In other words, a drop in new orders means there is a possibility to complete the remaining ones.

Optimism regarding the prospects took an apparent nosedive. The degree of confidence is the lowest in the history of surveys and the weakest for the past two years. The businesses are hoping for an increase in demand once inflation reaches its peak. It is, however, reasonably burdened by price pressures, the cost of living, and worsening economic prospects against the backdrop of interest rate hikes and quiet buyer sentiment.

1. The U.S. economic downturn is building up in the new quarter as confidence in further prospects deteriorates dramatically. The major decline is observed in the services sector.
2. While the output in the processing industry has remained stable so far, demand for goods plummeted in October. I.e. the current volume is maintained only due to the fact that companies are completing outstanding orders.
3. It is evident that this situation is volatile due to the lack of a revival of demand. It is unsurprising that companies are cutting back on raw material procurement to prepare themselves for the decline in production volumes in the coming months. That being said, the one positive thing here is the lesser shortage of raw material supply. Along with the stronger dollar, it also lessens the price pressure in the manufacturing sector.
4. Pricing pressure in the services sector has intensified against the backdrop of rising food, energy, and staff costs and increased cost of loans. However, this growing internal struggle resulted in a slow-paced increase in average prices for services. In other words, coupled with the lesser price pressure in the goods-producing sector, this strengthens the position. That way, the consumer price inflation shall either stabilize or decrease in the coming months.
5. All in all, the U.S. economy faces an increased risk of contraction in the fourth quarter, while inflationary pressures have remained stubbornly high so far. At the same time, there is another perspective—weaker demand should help curb inflation, especially if the interest rates keep increasing.